Home Discover Pup Dog Inspires Recovering Addict To Get Back On His Feet And Wins...

When you’ve hit rock bottom and you think things aren’t going to get better for you. It only takes just one small push that get us right back on track. One spark of inspiration to make us realize there’s more to life.

For Patrick Regan, a 35-year old local of Lindenhurst, New York, he has indeed hit rock bottom. He was homeless, unemployed and was addicted to opioid – an opium-like substance that can be addictive and can have sever effects to one’s body.

It seems like there is no way out for Patrick – until he met Clove, a pit bull. She used to be abused in dog fighting pits and was queued for euthanasia, until she was saved by Ruff House Rescue – a non- profit organization based in Nassau County, New York.

Despite all his troubles in life, a little voice inside him told him to go ahead and adopt Clove as he fell for the pup at first sight. The problem is, it seemed like the affection only went way. Clove didn’t interact much with Patrick and didn’t show much personality. One day, he brought her to the park to play and Clove went nuts – rolling around in the grass and running around the park.

He then realized that Clove loved the outdoors – this started the bond between the two of them. Patrick then started to get interested in outdoor activities so that he and Clove can do more activities together. They started hiking and it turned out Clove was very into it too! 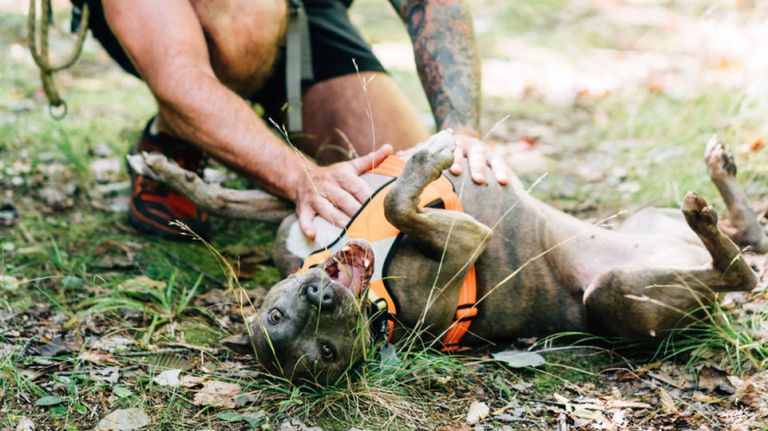 Clove did so much more for Patrick – much more than just finding a new hobby. Remember, Patrick was struggling to keep it together. When Clove came in to his life, he was inspired to push himself to get back up. He found a job and reverted to a healthy lifestyle.

Facebook page The Dodo, made a video about them and went viral hitting 22 million views. Their story captivated so many hearts that the Petco Foundation has decided to award Ruff House Rescue, among others, a grant because of Patrick and Clove’s story. According to Petco Executive Director Susanne Kogut, Patrick and Clove’s story is an obvious winner.

See them in action in the inspiring video below: